the Gardens Shul is a Family!

More than a Community

The oldest Synagogue in South Africa

In the magnificent, historic Gardens Synagogue

on your upcoming wedding!

Before you come to Shul.
Where to stay & eat.

The Gardens Shul has a wide variety of learning and engaging opportunities.

More than a Community the Gardens Shul is a Family!

The Cape Town Hebrew Congregation – Gardens Shul – is situated on the historic Company gardens and located a stone’s throw from the South African Parliament complex.

Founded in 1841 it is the first Jewish community in Sub-Saharan Africa. As the original Congregation, it was responsible and facilitated the establishment of many of the other Jewish communities in South Africa and is thus referred to as the ‘Mother Synagogue’ of South Africa.

The original Synagogue known as the Old Shul, was built in 1863 and currently serves as the entrance to the South African Jewish Museum. The Old Shul stands alongside the Great Synagogue built in 1905 and is active till this very day. With its twin towers, impressive dome, intricate mosaics, stain glassed windows and expansive Sanctuary the Great Synagogue radiates a rich sense of history and tradition. It is an architectural masterpiece and a source of great pride for the South African Jewish Community.

The Gardens Shul is a thriving, warm and welcoming, traditional orthodox community led by a world class team of Rabbi, Rebbetzin, Chazzan and Choir. It offers daily prayer services with full choral services for Shabbat and Festivals, blending traditional Chazzanut with contemporary, toe tapping melodies. To pray at the Gardens Shul is to enjoy a unique and inspiring Spiritual experience at the tip of Africa.

You can join a tour of the Synagogue from 10am – 4pm Monday through Thursday. No booking necessary. Please bring a valid form of ID for security purposes.

Visitors looking to attend a prayer Service at the Gardens Shul on Shabbat or Festivals please fill out our visitor’s form.

What is the latest at Gardens? 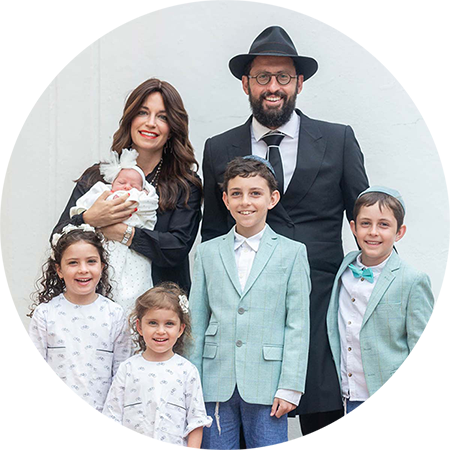 Rabbi Osher and Sarah Feldman have been at the Gardens Shul for more than a decade and have been the driving force behind the rejuvenation and growth of the Gardens Shul. Warm, Passionate, Innovative and Dynamic, Rabbi and Sarah have endeared themselves to the community while creating a non-judgemental, welcoming space for Divine Worship, Spiritual Connection and Community Togetherness.

More than a Community

the Gardens Shul is a Family!